French food is known globally for its finesse and flavour!

French food is known globally for its finesse and flavour. Traditional French cuisine relies on simple combinations that enhance the rich, natural flavours of basic ingredients.

A Cassoulet is perhaps the most famous dish from south – west of magnificent France and a true dish for the perfect winter. Its ingredients are usually pork sausages, goose meat, duck meat and sometimes lamb. The meat is cut and simmered with white beans (haricots blancs). Enjoy with the taste of the beans, the fatness of the duck melted on the tip of the tongue, so that you will never forget. They are eaten with bread. 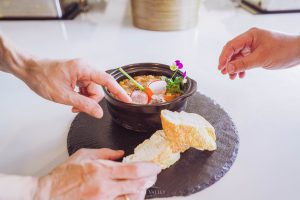 The place known as the homeland of Cassoulet is Languedoc, especially the towns of Toulouse, Carcassonne and Castelnaudary. All versions of Cassoulet are made with white beans (haricots blancs or lingots). In particular, Cassoulet of the Castelnaudary region uses “confit de canard” – a duck meat rubbed with salt, garlic, and sometimes herbs such as thyme, then covered and refrigerated for up to 36 hours.

What to drink: A red wine

For dessert: A French apple tart

Traveling right now to the magnificent France just at Valley Café with traditional French cuisine not to be missed this winter!